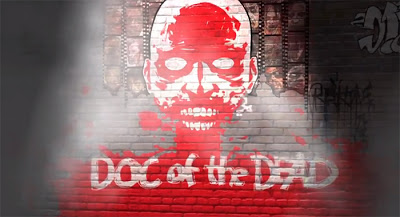 My wife and I–especially she–love the zombie genre: movies, tv, books, comics, etc. Long before we met, I had seen many of the classic zombie films like White Zombie, Night of the Living Dead, Dawn of the Dead, 28 Days Later, Shaun of the Dead, and she was reading The Walking Dead, Day by Day Armageddon, The Rising, Monster Planet, and World War Z. Once we met, and discovered each other’s love for all things creepy, we started to consume things together, and I’ve gotten her zombie-themed Xmas gifts every year, like Pride and Prejudice and Zombies, a The Walking Dead bathrobe, and The Walking Dead compendiums 1 and 2.

So bearing all this zombiphilia in mind, when my co-caster Ash Jones told me that his friend Jonathan London had co-produced Alexander O. Phillippe’s definitive zombie documentary, Doc of the Dead, and that it was not only worth a look, but also on Netflix streaming, I decided Dani and I had to watch it. We were not disappointed. DotD spans the genre from its roots in African and Haitian folklore, all the way to modern day conventions, fun runs, and cosplay. It’s got everything: the stories, the gore, the undead vs. viral debate, and even touches on the porn parodies. It’s also chocked full of interviews with genre masters like George A. Romero, Bruce Campbell, Greg Nicotero, Robert Kirkman, Simon Pegg, Max Brooks, and Tom Savini.

If you like zombies, you’ll love this. Grr. Arg.