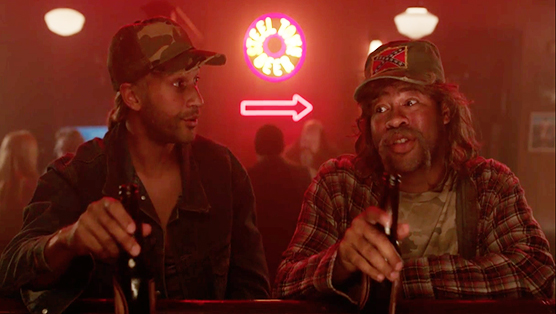 Keegan-Michael Key and Jordan Peele are back and as funny as ever. Season Four of the Comedy Central series Key & Peele premiered September 24 and did not disappoint. This season features a new titles open a la Sons of Anarchy with a country/classic rock twist on Reggie Watts’ theme song. Also, they clearly have a bigger budget for locations and special effects, and they’ve ditched the sketch introduction audience segments for conversational interstitials in a car driving across country.

Right out of the gate, they’re swinging for the fences with their racially charged satire and social commentary. Sketches about weeding out alien imposters, explaining ‘gay’ weddings to the uninitiated, President Obama keeping it real, and atypical rednecks provided several laugh-out-loud moments and much delight. One episode in, it’s a win.

I will definitely keep watching.